South Australia continues to be a strong force in the Telstra Road to Discovery competition. 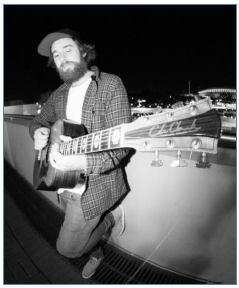 Glenelg-based Ciaram Granger, 28, will be one of just six finalists performing at the 2015 Telstra Road to Discovery grand final, the talent development program providing knowledge and public exposure for emerging Australian songwriters and performers.

Ciaram’s musical genres are folk, blues and country. The first song he learned on guitar was Streets of London by Ralph McTell and he still regularly plays it in his sets.

He was one of 11 semi finalists that performed at Melbourne’s Kindred Studios on Friday, 16 October in front of a judging panel of music experts. The grand final will take place in Sydney in November.

There were almost 500 applicants from across Australia in 2015. Granger’s success continues a tradition of strong performances by South Australians in the Telstra Road to Discovery, with Aldinga’s Loren Kate being a winner in 2014, Pt Pirie’s Paige Renee Court a finalist in 2013, and Kelly Menhennett winning the songwriter title in 2012.

To learn more about Ciaram Granger and to watch videos of music performances head to this link.

For more information about the Road to Discovery Program or other finalists please visit www.telstra.com/trtd.