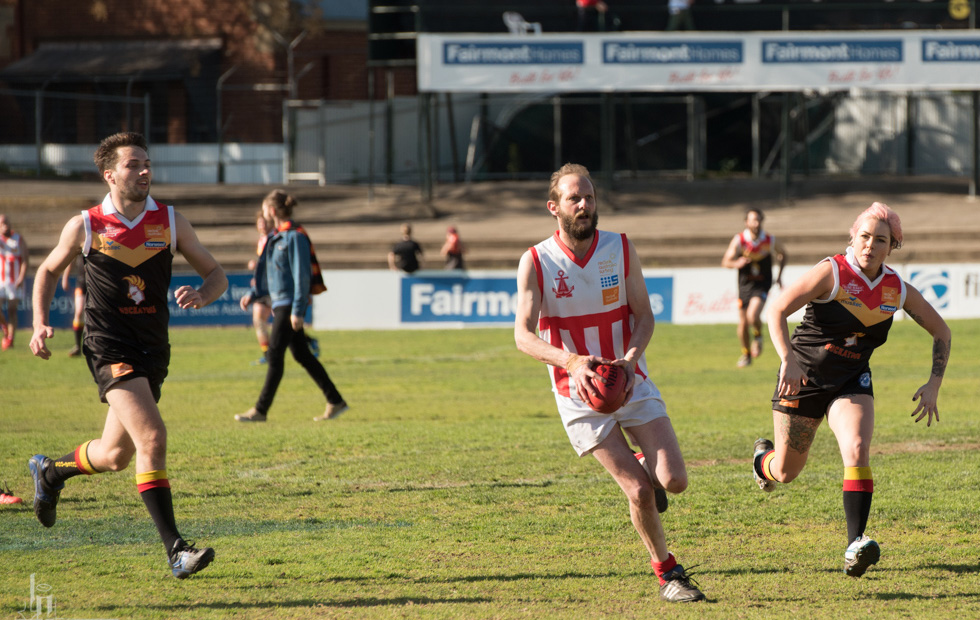 The Reclink Community Cup, a much-adored charity football series that pits musicians against media, rolls out its national tour dates for 2016 with matches in its city of origin Melbourne; plus Sydney, Adelaide, Perth, Hobart and Brisbane.

With humble beginnings in 1993, the Melbourne game now attracts more than 10,000 people and raises more than $100,000 for Reclink Australia each year.

With the inclusion of Sydney’s Reclink Community Cup in 2012, Adelaide and Perth in 2015, and now Brisbane and Hobart in 2016, Reclink Australia aims to create not just family friendly fun with live music and passionately-contested football, but also to raise national awareness and funds for Australia’s most disadvantaged.

“For Reclink the Community Cup is a time when the media – particularly the community radio sector – and local musicians band together to help raise much needed funds to enable us to deliver sport, recreation and arts programs that make a huge difference to lives of the neediest in our community; programs that foster self-confidence, fight isolation, develop skills, and establish connections and lasting friendships.”

Reclink Australia supports some of the community’s most vulnerable and isolated people: at risk youth, those experiencing mental illness, people with a disability, the homeless, people tackling alcohol and other drug issues and social and economic hardship.

The first match is slated for June 5 in Hobart, moving on to Melbourne on June 26, Adelaide on August 7, Sydney August 14, Perth August 28, and wrapping up in Brisbane on September 26.

The Reclink Community Cup – which is undoubtedly one of the most anticipated events on football, music and charity calendars – will feature performances by some of the country’s most notable artists with lineups for entertainment, players, and personnel in each state expected in the coming weeks.

In past years, luminaries such as Paul Kelly, Courtney Barnett, Tim Rogers, Tex Perkins and more have participated either as players, coaches or even water runners.

All the money raised in each state will go directly to local Reclink Australia programs to help participants like Raeles from Victoria who grew up as a state ward child, with no family or support. She is now a valued team member in Reclink’s cricket program.

“I didn’t actually have any family around me when I was a young girl. I was a state ward child and all I wanted to do was to just get out there and enjoy life and have a bit of fun and feel like I belonged to something. For me facing a ball: it’s just heaven. It’s just like I know I can hit you, come on give me a faster ball. It’s just a sense of pride that you’ve worked hard for your whole team. It’s not about you; it’s about your whole team. It’s the only day I look forward to in the week is to come down here and just be able to play cricket and be accepted.”

Last year’s events in Melbourne, Sydney, Perth and Adelaide raised more than $215,000. This year with the inclusion of Brisbane and Hobart, Reclink Australia aims to raise more than $250,000 to better enhance the lives of people experiencing disadvantage around Australia.

Volunteer callout:
Reclink Australia is currently calling for volunteers to lend a helping hand with each state’s Community Cup. Please head to the website to sign up: www.communitycup.com.au

Reclink Australia targets some of the community’s most vulnerable and isolated people: at risk youth, those experiencing mental illness, people with a disability, the homeless, people tackling alcohol and other drug issues and social and economic hardship.