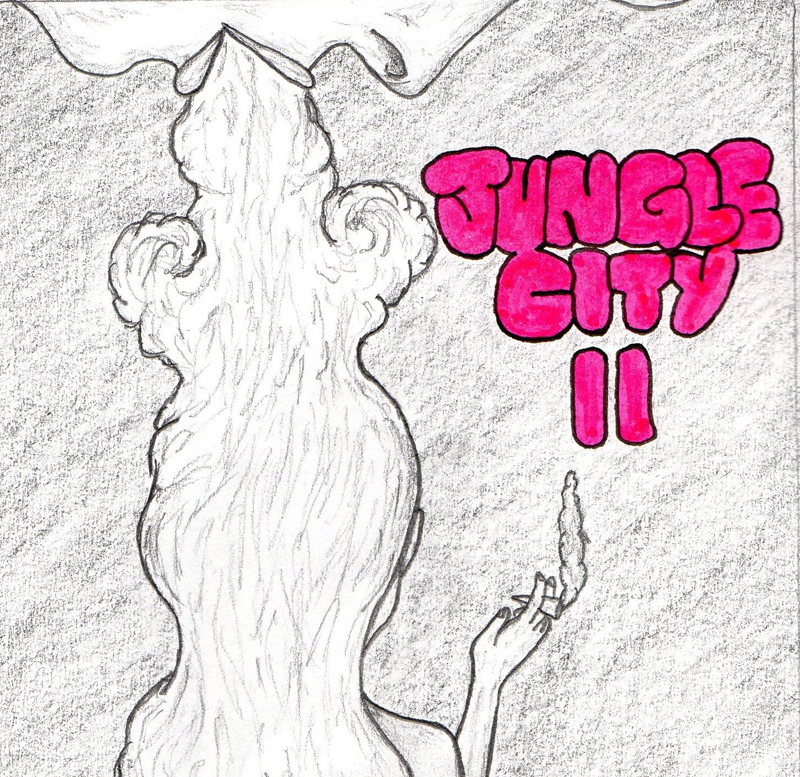 “I think I might kill myself today just to see what happens next.” So begins Jungle City II, and while they probably won’t be providing the backing track for any Beyond Blue advertisements anytime soon, Jungle City have self-produced a fine-sounding slab of unapologetic hard rock.

“I wanna smoke inside…I wanna piss in the street,” sings Brenton Wilson on “Fun Machine”, the straight-ahead, lockstep-grooving second track, and it’s as telling an indicator of what to expect as any.

This power trio plays aggressive rock of all varieties, with Luke Wilson pounding the drums, Kaileb Rothwell ably grooving on bass, and Brenton Wilson riffing on guitar while overseeing the festivities with a capably-snotty wail on vocals.

Palm-muted syncopated riffer “Nena Vamos A Tener Sexo” follows, which Google translates to, “Baby Come to Have Sex,” and adds a bit of metal just when a first-time listener might have wanted to peg this album as a funky, bluesy hard rock exercise.

As Jungle City II continues, further range is demonstrated, such as with the hammer-on waltz “F# Dog”, the smoky, dimly-lit bar slink of “Live For Free”, and the funky stoner jam “How Do You Feel?”. The latter comes complete with a backwards-masked psychedelic breakdown, which gives way to a drum solo, which eventually leads to a Latin-grooved guitar freakout.

Jungle City II gets better as it goes on, as the somewhat rock-by-numbers opening tracks give way to more experimental and eclectic tangents.  It’s kind of juvenile and cartoonish, but with cover art featuring a charcoal sketch of a girl’s butt complete with thigh gap, it’s not like you weren’t warned.  The songs are catchy and the amps go up to eleven, so if this sounds like your bag, check ‘em out on Bandcamp.