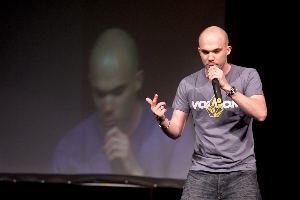 I was born in Durban, South Africa where I started my career as a hip hop artist. After winning tickets to a Jay-Z concert in a freestyle competition, I put together a demo…my epiphany moment. I pushed that around for 2 years then decided to move to the UK to take the next step. While in the UK, I was signed for a year (MKVibe Records), then went DIY and put together an EP, produced and recorded at Soho Studios in London, which got played on BBC London Radio.

At the beginning of 2013 I relocated to Adelaide, Australia, to continue my music career. I have performed a few shows so far including NSS in Elizabeth, the Glenelg Backpackers, and I did a short performance with Guy Sebastian’s band at a workshop held by ETI_Music.