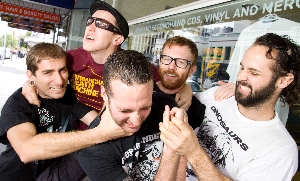 Stolen Youth is a hardcore punk band reigning from Adelaide, South Australia. The band formed in 2000 and quickly gained momentum in the following years as a result of their face past hardcore-punk sound and strong DIY ethic. Stolen Youth garnered much attention with their EP ‘When Spiders Unite’ and gained a strong national following with their subsequent release and debut album ‘Unconscious in Orthodox’. The band is renowned for its intense live show, social and politically inspired messages and their no-frills approach to hardcore in a time where fashion often overrides the music.