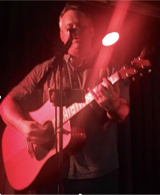 Richard is a singer songwriter who has been performing in many venues around SA, NSW and VIC since he was a teenager in the 1980’s.
Richard covers a range of styles some have described as popular, blues, rock with a lot of passion and colour.
Richard’s music has a positive message of hope behind it.

I am an original singer songwriter with over 30 years experience. With a repertoire of over 40 songs I can perform up to 3 sets over 3 hours, of original songs as well as familiar songs from performers such as Van Morrison, Paul Kelly, Goanna, Bob Dylan, U2, Missy Higgins and Crowded House. Depending on forthcoming finance my percussionist will join me. I encourage you to contact me to discuss further.

Since 1986 Richard (Rick, Ricky) has been playing as a solo artist, duo member, original and cover band member, music director, and children’s entertainer Ricky from Ricky and Pete. Richard has been playing live and recording regularly, bringing out a number of original music albums. Richard covers a range of acoustic styles with blues, rock, jazz, Australian folk and Celtic influences. Richard’s music has a positive message of hope behind it, expressed with intimate passion and colour.

Andrew Cooper from The Rising Sun Hotel in Auburn and Scorcherfest said this about Richard…. “good energy, engaging performance”.

Was offered to play in Melbourne, so began the journey of original band Who’s Watt, went onto playing residency at the Flagstaff Hotel in Adelaide CBD, as well as many other venues such as Lerox, Clubfoote and the Tivoli. Recorded throughout this time.

Rip the Bag. Continued to write own music.

Steppin Out. Writing own music

Playgroup, my kids. Writing own music

The Plums. Writing & recording own music at home studio

Music specialist within the following rto’s

“Up Close & Personal” sessions, where musicians share their stories through Q&A