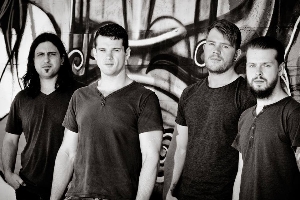 Hailing from Adelaide, Australia, AUDIUM, bring a heavy rock/metal groove, powerfully gritty, melodic vocals and elements of industrial/electro together to create a sound bigger than the sum of it’s parts.

AUDIUM formed in early 2013, with founding members Daniel Giaccio (guitars) & Ashton Rudd (bass/vocals). Once Adam Lunnay (drums) was brought into the line-up, the strength of the music was undeniable. After a brief search for a vocalist, Chris Gard joined and the band was complete.

Since their inception, AUDIUM have pushed themselves to create the best songs they can. They have been working on a debut album with producer Michael Sinclair at Blackhaus Studios. Their first single, ‘The Fire Inside’ (mixed by Henry Seeley in Nashville, Tennessee and mastered by Paul Stefanidis at the Viking Lounge, Sydney) was released in December 2014, with the album soon to follow.

In the meantime, the guys are playing as many shows as possible, spreading the word (and more importantly, the music) of AUDIUM to crowds across Australia. Their first interstate trip was as the winner of Heavy Magazine’s ‘Brewtality’ competition; where the band opened the annual festival in Melbourne.

With their sights set firmly on a bright future, AUDIUM are here to stay.