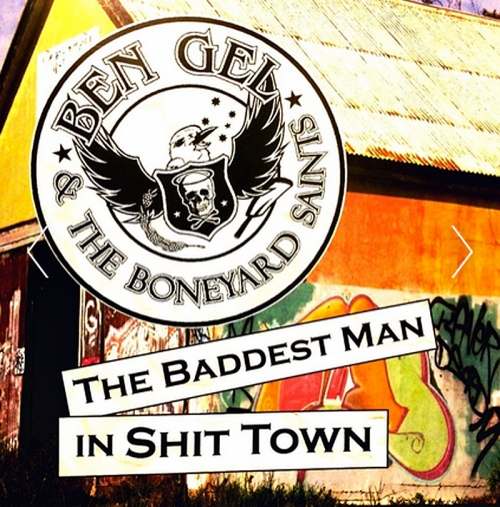 the baddest man in shit town

As I sit at my writing desk enjoying a well deserved whiskey, I contemplate the title of my review subject, the delightfully titled ‘The Baddest Man In Shit Town’ by Ben Gel & The Boneyard Saints. I wonder what could be in store. A country and western epic? A rap album? Oh no my friends…old school punk rock and roll.

Reading the handy little enclosed bio it seems that Ben Gel & The Boneyard Saints are an Adelaide supergroup (don’t you hate that term…) of sorts. They’ve been together since 2013 now and feature former (and current) members of The Gels, Muscle Car, Perdition, Meatbeaters, Dead Popes of the Vatican, Lazaro’s Dog, Subtract-S, King Krill, Tantra, Resin Tree, Vanity Cure and more…phew, quite the resume.

Opening track ‘Push Me Pull Me’ sets the tone beautifully with a thirty four second burst of angry but poppy guitars, chanted call and response lyrics and super slick recording. Ladies and gentlemen start your engines.

Easily my favourite track on the album follows next with ‘Anthem For All Downtrodden’. As the name suggests it’s an anthem – something risky to state in a song title but pulled off with aplomb. “This is an anthem for all downtrodden, this a song for you” is the repeated chorus and works brilliantly with the repetitive and simple melody. You could quite easily imagine the crowd interaction and a live show for this song, and to put it bluntly, it’s catchy as fuck.

Whilst on the subject of inappropriate words ‘Eat, Drink, Fuck, Fight’ is another catchy anthemic song that would surely be a crowd favourite for call and response. It’s one of the songs containing the angriest feel and lives up well to its title. The lyrics are relatively spartan (see title for lyrics) but are great…wouldn’t be at all out of place in an extreme sports video.

Overall great work, professional recording, musos that know their craft as good as you’d expect when you look at their previous bands, well packaged and super catchy. It’s been on high rotation in Casa De Newsome. Nice work, lads.